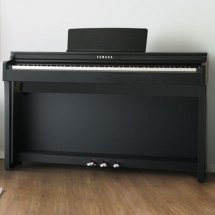 Often when people shop for a digital piano or keyboard, they ask us, “Do these pianos have weighted keys?” This may be because a well-meaning friend told them to look for a piano with weighted keys, also known as a weighted action.

What most people don’t know is that virtually all instruments have a weighted action - and not all of them are good! ‘Weighted’ simply means that they have some device to make the keys heavier so that they feel a little more like a piano. This can mean all kinds of things, from a spring underneath the key to a system of rubber bands! There are two big problems with basic ‘weighted’ actions:

You can have fun with an instrument with a basic ‘weighted’ action - but you cannot learn to play piano on it!It would be like practicing your baseball swing using a 12 inch ruler instead of a real bat!

Grand pianos don’t have springs or rubber bands - they have hammers! When you push a key, the ‘weight’ you feel is the hammer lifting to strike a string. When you release the key it returns naturally through gravity.

If you have any questions about digital piano actions you can email me at pete@lacefieldmusic.com. A New Era of Pianos: By Kadie Healy

A New Era of Pianos: By Kadie Healy

Put away the ideas of spinets and why the public is going digital.

When most people think about playing the piano they are taken back to a moment when they were young sitting at their grandma’s spinet piano. While this is a sweet memory, learning and playing on spinets should really be a thing of the past and this is why.

The spinet piano began being manufactured in the 1930s in the depths of the Great Depression. It was a trend among the manufacturers to make pianos smaller and cheaper for families who wanted a low price and had very little space for a piano. These pianos were known for their drop action, an indirect action that allowed the piano to be smaller and have the top of the piano be only a few inches above the keyboard. Production of these instruments halted when teachers realized that their students were not learning proper touch and technique. They are also a piano technician’s nightmare. Due to them being fun sized, they have to take apart practically the entire piano in order to make even the slightest repair.

And these are the pianos we are buying for our children? You may say if it was good enough for grandma then it will be good enough for them. But is good enough really the option that you want when you are learning to play the piano? Take ice skating for instance. If I put on a pair of skates that belonged to my mother, they are beginning to rust and the leather is wearing out and they are not quite the right fit; but were good enough to get from point A to point B. Would I want to use those to enter into a competition? Would I have fun skating in them or just focus on all the things that are wrong with them?

Listen… If your child needed a computer would you buy them a $20 one from a garage sale? Absolutely not. You would go to the store and pick out something that would allow them to do all of the things that they would need. The same goes for the piano. There is a reason why these piano are so cheap online. They are out of date, inefficient, and most likely sound and play horribly. Invest that extra money for something that will encourage playing, touch and technique. Most customers today choose digital pianos...here’s why.

Digitals are the new era of pianos. When some people think of digital pianos they think of something that is fake sounding and feeling. To be honest, that is how digital pianos were in the past. But just like the cell phone has come a long way in the past 20 years so has the digital piano. Manufacturers like Kawai have gone to tremendous lengths to produce a piano that not only sounds just like an acoustic grand but also has the same touch and feel. These are the pianos we need to be buying our children. They feel great and sound great when you play them, so you find yourself spending more and more time playing because it is simply enjoyable.

We are happy to accommodate piano-viewing appointments after hours and on Sundays. Please call us to make an appointment.